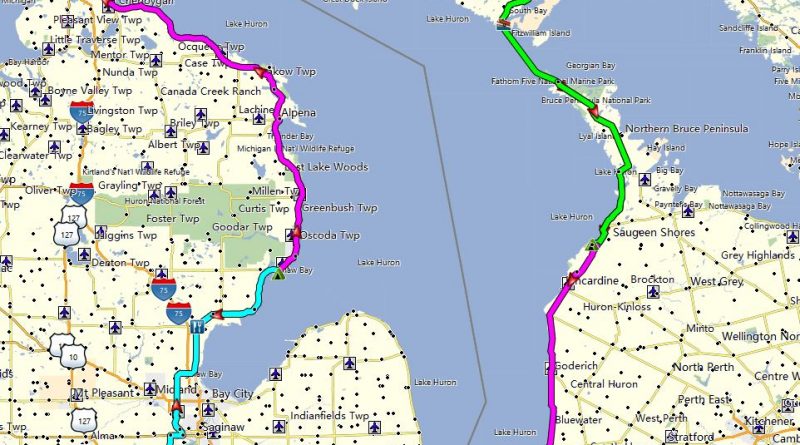 On August 10th, Dave DeCook, Dave McFall, Harry Jones and myself got together to do a circle tour of Lake Huron. Dave McFall and I met in Stockbridge about 9:00 on Saturday morning so that we could ride up to Standish and meet up with Dave and Harry at Wheelers restaurant about lunch time.

It was a short hop after lunch to get to our first campsite, Tawas Point State Park. We pulled in about 3:30.

After setting up camp and exploring a bit we went to dinner at a local Chinese food restaurant.

Back at camp, we sat around for a bit and then hit the sack for the night.

We were up around 6:00 the next morning. After a light breakfast we got everything packed up and ready to go about 9:00.

We rode to Cheboygen and stopped at Jonnies Bar for lunch. We crossed the Mackinac Bridge about 3:00, traffic was a bit heavy and we got stuck behind a semi doing 20mph all the way across. We rolled into the Straits State Park about 3:30.

Sitting in the camp, we could hear the traffic noise floating across the water from the bridge, hoping that it would lessen as the night went on. The semis were really loud and they engine braked all the way down the bridge.

Dave DeCook had fixed a small cooler to his camper trailer and we had some brats and potatoes cooked over an open fire for dinner.

Thankfully traffic did slow up as night fell and it was a nice quite evening. Into the sleeping bag just after dark for a good nights sleep.

Up again about 6:30, another light breakfast in camp and we're ready to hit the road at 9:00. This is turning out to be a nice pace, if we can keep it like this for the rest of the trip it'll be great.

We rode into Sault Ste. Marie late morning, and since I had never see the Soo Locks before we stopped and watched a couple of ships go through. Then we stopped at Penny's Kitchen for lunch just a couple of blocks over.

Crossed the Sault Ste. Marie International Bridge into Canada about 1:30 and continued on the Trans-Canada Highway 17 to the Serpent River camp grounds. We pulled into camp about 4:30.

This camp was nice, not a lot of campers or tents, but at one end of the grounds there was what looked like some "permanent" trailers, lots of people hanging out, bar-b-queuing and enjoying the cool evening. There was even a pool, it was a bit cold, but refreshing.

After setting up, we walked down the the Serpent River.

As the campground was right off highway 17, there was a nice little restaurant across the highway called Annette's, so we walked across and had dinner. Annette was behind the counter cooking and her mom was taking orders. It's a nice mom and pop kind of place, with great food. We walked back across to camp and hung out for while before hitting the sack. It gets dark quick, and there's not much to do after that. Traffic on highway 17 wasn't too bad, kinda reminded me of Cycle-Moore.

Up at 6:30, break camp, then walk across the street to Annette's for breakfast. I had some fantastic french toast, with real Canadian maple syrup. Breakfast of champions. We dodged the trucks on 17 back to camp and were back on the road around 9:00.

Today was a short ride today, only about 150 miles to the Killarney Rocher Rouge camp grounds. Killarney's a small fishing village out at the end of nowhere. Population 500.

We pulled up to a house about 2:00 to check into the camp ground. Then it's down a dirt road about a half mile to get to our spot next to the lake. We get set up and then headed into town for a late lunch/early dinner.

We end up at this fish and chips place right next to the water in Georgian Bay, next to the boat that goes out and catches the fish we were eating.

We wandered around town for a while, looking at the houses and boats.

There were no showers at the camp so we had to ride back to town and go to the local marina and use their showers, at a loonie for four minutes. Just enough time to lather up and rinse. But there was great water pressure and it was nice and hot. After cleaning up, it was back to camp and a nice campfire. Sunset was beautiful.

We stayed two days at Killarney. The next morning, DeCook's air mattress was flat, so we went to the local oufitters to get him a new mattress. It was also one of the few places where we had cell coverage, so we all checked our messages and voicemail. While we were there, we heard about this great beach that was on the lake so we went to check it out.

Now, to hear it described, it was a mile long and had white sand. It turned out to be a bit smaller that that, but still a nice beach with a view.

On the way to the beach, we passed a moose statue. I forgot to check out why it was there, but we posed for the obligatory picture.

After visiting the moose, we went down to town again and wandered around a bit more, and then decided that we'd go kayaking. Harry wasn't into kayaking, so it was just DeCook, McFall and myself. We paddled around on the water for a couple of hours and had some fun. Afterwards, we met up with Harry and had dinner at the restaurant in the marina. Another four minute shower and it was back to camp. We had to be out early the next morning, so we kind of pre-packed the gear we could, had another campfire and went to bed at nightfall.

We had to be at the ferry in South Baymouth by 12:30 to check in, as the ferry was leaving at 1:30. So we were up about 6:00 am as usual, but we had a quick breakfast in camp, packed up the rest of our gear and headed out, about a half hour ahead of schedule. We pulled into South Baymouth right on time, checked in, then we split the remainder of my pizza from last night waiting for the ferry to show up.

We loaded onto the ferry, tied down the bikes and went to the cafeteria to have lunch. It was about a two hour boat ride, and I didn't even have to disconnect the trailer this time.

We arrived at Tobermory around 3:30. It was a nice boat ride, weather was near perfect, although it was a bit chilly so we stayed inside most of the crossing. After unstrapping the bikes, we took off for MacGregor Point Provincial Park where we were going to stay for another two days. We got to the park about about 5:00. After setting up camp, we rode back into Port Elgin and had dinner at B&G Outlaws. Back to camp and a good night's rest.

Our last day camping, we slept in as we didn't have to be anywhere. Had breakfast in camp, and decided we'd go on a hike and explore the camp. We had to hike about a mile or so to get to the beach.

Back at the tents, we had a light lunch and hung around some more. We just kinda took it easy today, it was going to be a long ride tomorrow to get home. Back into Port Elgin again for dinner at Chesters.

Homeward bound. Today, we head home. We slept in a bit, no need to rush. We did get the only rain during the whole trip last night. It stopped about 5:00 or so, but everything was still wet when we go to pack up. We ate a quick breakfast in camp and headed out about 8:30. The plan was to ride together until we reached the Bluewater Bridge and crossed back into the US, where we'd split up and go our own routes back home. We got to the bridge around 11:30 and man was it packed. It looked like everyone in Canada was crossing that morning. We got split up while we waited in different lines, I didn't finally get across until just after 12:00. I stopped at a Wendys for lunch and a LARGE frosty, I got baked sitting in the sun for a half hour. After a nice cool break it was an easy ride home. Pulled into my driveway at 3:50, ready to take a break from riding for a few days. I was whipped, this was one of our longer days, mileage wise.

Here's the route we took, going clockwise. Overall mileage was about 1200 miles.