Another terrific BMW TCD dual sport/adventure bike ride is in the books. Eight riders met up Friday morning at BMW MC of SE Michigan for this foray into the wooded hills and vales of southeastern Ohio - ride organizers Dave Allgood and Greg Crago, plus Jack Johnson, Darryl Smith, Eric VanDyke, James Wick, Mark B and yours truly. The group got underway shortly after 9:30 under clear sunny skies - a perfect day for riding.

The planned ride route took us almost the entire way on state highways and county roads, with the exception of a short stretch of I-75 and I-280 to skirt around Toledo. At the fuel stop in Pemberville OH Shannon joined up with us. We continued to proceed south and east headed for Coshocton. The fun started on the final leg into Coshocton, from Loudonville OH, about 35 miles northwest of Coshocton. This 51 mile leg gave us a taste of what was to come on Saturday and Sunday, routing us over a variety of twisty graveled and paved county roads. Woot! The weekend was clearly gonna be some fun!

TCDer Jeff Schneider, who rode down directly Friday afternoon, met us upon our arrival at our home for the weekend, the - ummm, charming - Downtown Motel in Coshocton. This was a total of ten riders who would mount up Saturday morning for a two wheeled tour of southeastern Ohio's Amish area.

Saturday morning broke sunny and dry. After breakfast the ten of us headed out to ride. Saturday's ride loop had us covering ~122 miles north and east of Coshocton through the heart of Amish country. The graveled roads were dry and very dusty - it was good to be a ride leader. But dust aside, the riding was wonderful, twisting and turning up hill and down through charming rural scenery, everything from Amish farms through deeply wooded areas along streams.

Lunch was at the Tents of Grace Cafe in Gdnadenhutten. Everyone was hungry and the food was excellent.

At the completion of Saturday's ride and back in Coshocton the gang decided to head over to Coshocton's historic river canal village. At the Warehouse Steak n' Stein the group devoured a fine meal and indulged in adult beverages; a fine finish to an excellent day of riding.

We awoke Sunday morning to overcast skies. The weather forecast for the area indicated that the overcast was likely to last through most of the day with a possibility of light rain. Following breakfast we once again headed out, this time for a loop that would cover some 184 miles that traveled east, south and then west of Coshocton. And once again the group was treated to a wonderful ride through more of southeastern Ohio's hilly and scenic countryside. Mid-day did find us encountering a bit of drizzle and very light rain, but it wasn't anything significant and did help to hold the dust at bay. At a gas stop north of Cambridge we parted with three of the group - Jeff, Eric and Mark all needed to be back home by the end of the day. Shannon had a work commitment that prevented him from riding with us at all on Sunday, and he had departed directly from the motel in the morning.

After fueling and stretching, the remaining six of us proceeded onward. No adventure ride is complete without at least one incident. This time it was Darryl's turn in the adventure incident barrel. Ohio loves gravel for surfacing its unpaved roads. Almost all of our unpaved riding occurred on surfaces covered with a generous covering of loose, marbly gravel. One had to get used to the bike constantly squiggling underneath on the somewhat ball bearing-like gravel, and the conditions required judicious application of brakes, throttle and lean angle. Upon rounding a left hander on a stretch of this surface Darryl applied a bit more throttle on his GS, shod with Tourance tires, than the underlying gravel found acceptable, and down he went. He wasn't going all that fast and escaped the incident unscathed. His GS, however, was not so lucky. Sliding along over the graveled surface the right side cylinder head valve cover bore the brunt of the slide. The thin magnesium valve cover was heavily abraded, with the result of a small hole being gouged out.

After giving the epoxy patch a bit of time to set, James offered up some engine oil to top off the bit lost out the hole. Bike was fired up and ran fine. We rode on. The patch held perfectly - several subsequent inspections showed no oil seeping anywhere from around the repair. Good as new!

The remainder of Sunday's ride was fine, as the weather broke and we were treated to a clearing sky and sun as we worked our way back to Coshocton. We even had a little fun with a shallow water crossing.

Monday morning early found a light rain falling, tapering off to drizzle and mist by the time we were packed up and ready to head out for breakfast. Monday's return trip route started out with a last taste of back road pleasures before hitting various state and county roads for the ride home. Darryl had commitments that required he get back home, and so he said his goodbyes before heading out from the motel for a direct trip back. The remaining five of us headed off to breakfast. By the time breakfast was over the precip had diminished to a very light mist, and off we went. Half an hour or so into the ride the mist was done, and those of us remaining were treated to steadily improving weather as we worked our way north and west over yet more tasty southeastern Ohio back roads. The back roads portion was terminated by a stop at Pleasant Hill dam just south of Perrysville. 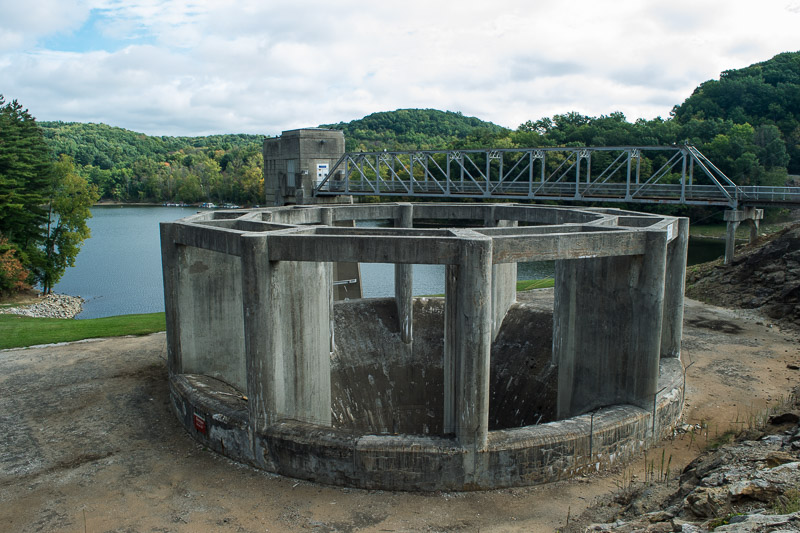 After our stop at the dam we traveled a few miles to a nearby Cracker Barrel restaurant. Following lunch James split off to head directly back home, and the remaining four of us proceeded to travel the pleasant, but much less interesting and scenic, two lane state and county roads for an uneventful return trip home, concluding yet another fine BMW TCD ride outing.

Back home I unpacked the bike and began many loads of laundry - there was much dust and dirt embedded in clothes and the bike! Clearly my GS needed a thorough cleaning.

Curious to see where we traveled? Click here to view a Google map of the weekend's ride routes.