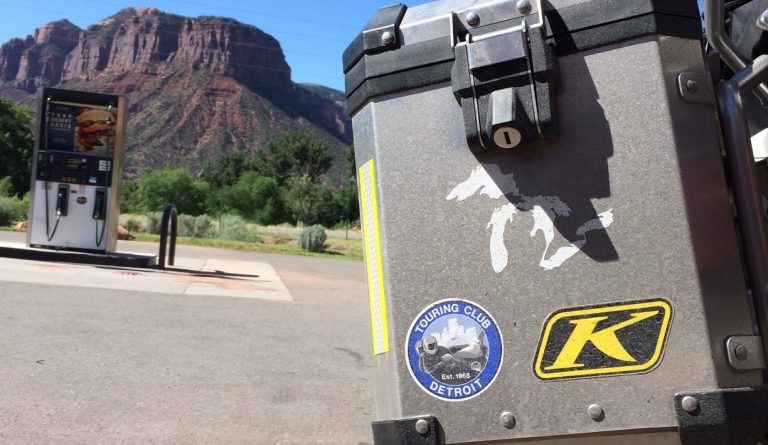 On Monday, July 18, I headed out early for Lansing, where I met up with Rick and Jim, for a journey to Paonia, Colorado.  We planned to attend the Top O’ the Rockies MOA rally. I’d met Rick at a dealer event in Michigan, but had never ridden with him or his friend Jim.  Both of them had ridden extensively in Colorado.  I had attended this same rally in 2015, but rode west alone, and mostly stuck to pavement during the trip.  Based on some recent TCD events, especially the Washtenaw ADV ride, I was looking forward to some dirt riding.  We fired up our GSAs and headed west, staying the first night in Des Moines.  After riding through a brief morning frog strangler, we reached Limon, CO, at the end of day two.  While some dread crossing the Great Plains, I grew up out there, so it will always be home.  I look forward to a day when I have the time to travel the two lane roads, instead of the interstate.

Wednesday morning, after a quick spin around Colorado Springs, we headed down 115 to Canon City to ride some dirt.  Jim had been telling us about dirt he’d ridden in Colorado, and soon we were on the Shelf Road.  Shortly, I learned how the road got its name.  As I rounded a blind left-hander, I met a small pickup coming my way. Actually, it gets larger every time I replay the event, and may have been a one-ton with duals.  So, there’s a vehicle approaching and a steep drop-off on the right, on a narrow section of road.  Fortunately, I was able to squeeze between the truck and shelf edge.  Cheek clenching completed, I rode on and just tried to absorb as much of the amazing scenery as possible.  We stopped for ice cream in Cripple Creek, and then went south on Phantom Canyon Road.  Again, the dirt road and views were amazing.  We grabbed a room in Canon City, and then walked downtown for dinner and few cold beers.

Thursday, we headed to Paonia, via more back roads through Guffy, then Buena Vista, Cottonwood Pass (pavement ride up, gravel ride down).  We capped off the day with a great paved twisty ride on 92 near Black Canyon of the Gunnison.  While riding and talking on the intercom, Jim was attempting to teach me the 10 step turn process from a riding course he had taken.  Despite his best efforts, that was about 7 more things than I could retain, especially while trying to stay in the same zip code as Rick.  He was cruising and always under control.  We rolled into Paonia, set up camp, and then walked to dinner downtown followed by a visit to the local Brew Pub.

The rally was well attended.  During the closing ceremonies, I think I heard them mention about 500 or so were registered.  There were plenty of vendors, plus food, beer tent, and live music Friday and Saturday nights.  Southwest Moto Adventures even showed up on Friday with 4 new Africa Twins to rent out for the next day’s ride.

In Paonia, we met a bunch of friendly folks.  The locals were eager to share info on good riding in the area.  A local club guy, Scott, gave us a core dump of riding options at breakfast on Friday.  We couldn’t retain it all, but Friday and Saturday we checked out Black Canyon of the Gunnison, Colorado National Monument, Highway 141 through Gateway, and Grand Mesa several times.  Possibly, the highlight of this trip was climbing the gravel switchbacks on Lands End Road up to the Grand Mesa.  Earlier that day, it was 97 degrees at Colorado National Monument, but when we reached the top of Grand Mesa, it was 52!

On Sunday, Rick and I headed out to visit family/friends in eastern Colorado.  Monday we re-connected and headed toward home, while Jim stayed a few extra days to check out more dirt.  Rick and I were jealous, but needed to get home.  I rolled in Tuesday night after a 760 mile day, and overall 3,900 miles.  I was tired, but couldn’t stop smiling while thinking about the trip.  I had a great time riding with veterans Rick and Jim and learned much from them and the experience.  I’m wishing now I had stopped more often and taken more pictures, but that gives me a reason to return and I can’t wait to go back!