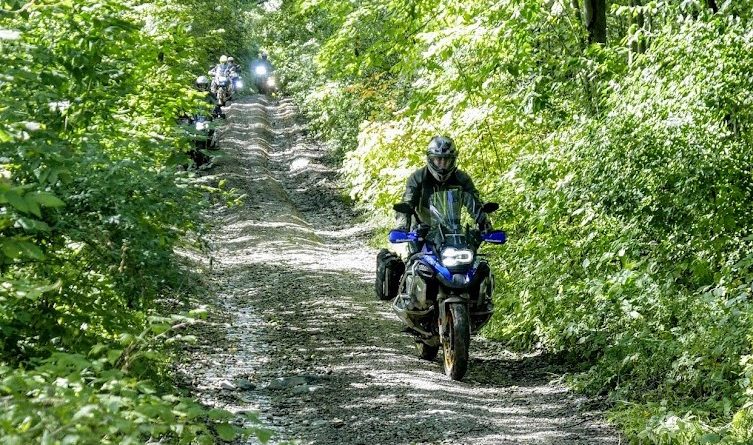 The original 10:00 am start of the ride was postponed three hours to a 1:00 start to allow the rain to clear out of the area and somewhat run off the route. Eleven riders gathered behind the Brioni Grille to enjoy what turned out to be a beautiful sunny day. Jeff Schnieder (aka Sandsquid), Mats Cedar, Kevin Gao, Craig Grissom, Steve Doktor and his wife Shari (on her own GS) and a few others, including President Mike Eckstein making his first club ride since his surgery were all able to adjust to the rain delay.

We headed out of Clarkston and onto the route with me in lead and Mike riding sweep. We were soon into the Ortonville Recreation Area and onto Sands Road when the first patch of slick (greasy?) mud was encountered. Unfortunately, the Doktors understandably bowed out at this point as Shari's GS was shod with Pilot 5s, which proved a bit to squirrely on the fluid road surface. We rounded up to Fox Lake Road, following the rock laden two-track down hill, through the puddles (ponds?) and out to Big Fish Road.

From there, the rest of the ride was fairly clear rolling as we took in all the twists and turns that can be found in the Oakland County backroads. Numerous "tunnel of trees" provided quite a scenic ride as the colors are just beginning to change,. The one on Casey Rd was pretty spectacular. Riders slowly dropped out as they had prior plans for the afternoon that were now conflicted by our late start time. The road commission had freshly added a topping to a good bit of Delano road. That loose dirt had been turned into mud with the friction coefficient of Vasoline by the recent rains. The Indian Lake Road and Bald Mountain areas provided nice curves and scenery.

At then end, four of use were still in the group when we pulled into the Paint Creek Cider Mill. All in all, given the recent weather, a very nice ride. Special shout out to Kevin Gao for playing the roll of event photographer Great shots, Kevin!