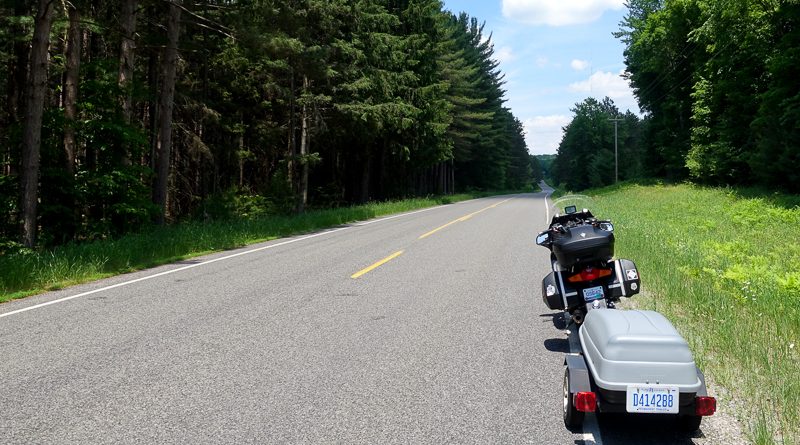 The motorcycle club's Longest Day ride was the 19th, 20th and 21st of June this year. This was the clubs first ride of the season due to the Corona virus closing a lot of campgrounds and restaurants.

As usually happens, everyone makes their own way to the campsite and meet up sometime during the day on Friday or Saturday. I left Friday morning about 8:30, my planned route zigzagging up through Michigan to Interlochen and CycleMoore Campgrounds. I like to take the side and back roads, through all the little towns, taking my time and making several stops along the way.

After a short break in Middleton to give my butt a break, I was back on the road. I then stopped in Le Roy for lunch at Mr. Pibs and a killer taco salad. Back on the bike at 1:30 and a short ride to Cyclemoore, pulling in about 2:45.

There were quite a few members there already, tents and campers/trailers all set up. Most of them were out riding when I pulled in, so after relaxing a bit I set up my tent and gear.

After a while, people started rolling back into camp, and I realized that I was the only street bike there. Everyone else was on dual sports. I think I counted 15 attendees, a pretty good turnout.

There was another street rider, Larry Benitz, who didn't stay at the campground but instead stayed down the street at a hotel. He and I ended up meeting Saturday morning to take our own loop for the day.

With the whole Covid thing we were pretty sure that all of us wouldn't be able to find a place to eat together, so we decided to grill over the fire. A couple of people made grocery runs and we had burgers, brats and even some steaks. There was a lot of other things to munch, most everyone seemed to have brought something with them to contribute.

There was even a hotplate and coffee maker for breakfast in the morning. As evening rolled around everyone gathered around the campfire, had some adult beverages and told stories.

Saturday morning, Larry showed up at camp, and he and I rode a loop that would take us to Petoskey. On the way up we stopped at a scenic outlook in Hayes Twp.

We rode up to Petoskey at the top of the loop and back down to Mancelona for lunch, stopping at a small diner called the Iron Skillet. With full stomachs we continued south back to camp, rolling in around 2:45 in the afternoon.

After a short rest, Larry went back to the hotel, unsure if he would come back to camp for Saturday nights grilling. I took a short nap and the dirt riders started filtering into camp in small groups. Another grocery run, the nearest store less than two miles down the road, and we had another fantastic evening of grilled fare.

After eating, the discussion turned to balancing on your motorcycle while stopped, so a few of the guys hopped on their bikes and started to give it a try. Mike Eckstein had a trick that was supposed to help keep your balance without touching the ground.

And after that, more stories around the fire.

Saturday night, sometime after midnight, it started to lightly rain. I was OK with that, I was in the tent and it was supposed to stop before we woke up. I was up about 6:30 Sunday morning and it did stop raining but everything was wet. The only thing worse that packing up a wet tent, is packing a wet tent in the rain. After packing and some hot chocolate, it was 7:45 and time to head home. About an hour from camp, I hit the tail end of a storm that was coming through and got dumped on pretty good for about ten minutes. After riding through it, I kept the rain suit on for another half hour or so, just in case.After a short stop in Perry for lunch at Subway, I was back on the bike and headed home. I pulled into my driveway about 1:25.

I always like to unpack the bike and trailer when I get home, otherwise if I sit down and take a break beforehand, I'll never get up. So after unpacking and a nice shower, I crashed for the rest of the day. I set up the tent Monday after work to dry out.

All total, the mileage for this trip was 707 miles, making it a nice three day ride. Here's my routes for the three days. Maroon was the trip up to Interlochen, teal was the Petoskey loop, and greeninsh track was heading south back home.