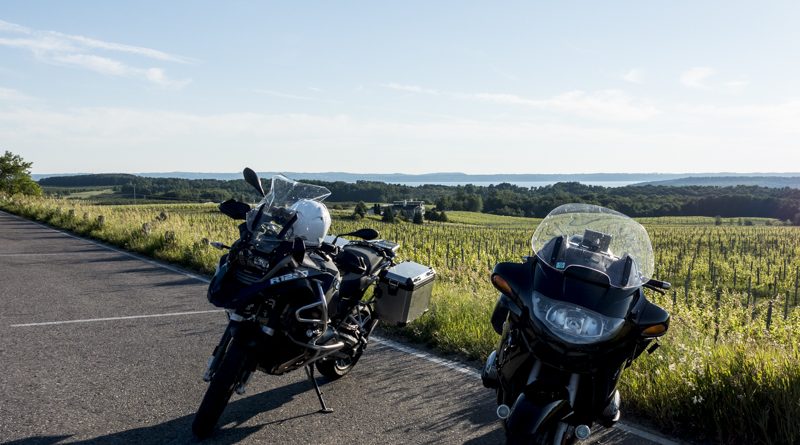 On June 24-26 the TCD had their annual camp out at Cycle-Moore Campground in Interlochen, MI. Leelanau Peninsula has some great riding and there was a huge turnout, some of the long time members saying it was the largest group for this ride that they could remember.

The GS'ers had their own route to follow, while Steve, Paul and myself followed a route that I had laid out.  It was still early enough that it hadn't gotten too hot yet,and it was a beautiful ride up. Turning right at Newago and following Hwy 37 all the way through the Manistee National Forrest, we arrived at Cycle-Moore campgrounds around 2:30PM.

There were already several members there, with their tents already up, just hanging out.

We found a nice spot towards the back, away from the traffic noise, so we'd have a quite place to sleep. Didn't find out about the screaming kids till about 11:00PM.  Traffic noise not looking so bad right about then.

After we set up camp and took a short break to let the heat die down a bit, Steve and myself took a ride out to the Mission Point Light House following Hwy 37 all the way to the end, stopping along the way at a scenic lookout to snap a couple of pictures.

At the end of 37 is the Mission Point Lighthouse.

Retracing our path south back to the campgrounds, we found several more members had arrived.  After a short break, some of us mounted up and went to dinner at the Karlin Inn.  Back at camp we got a fire going and sat around swapping stories about the days rides.  Despite the screaming kids, I got a decent nights sleep, I was whipped.

Saturday morning found us eating breakfast at Dilbert's, just a short walk from the campgrounds.  Back at camp, everyone kind of broke up into smaller groups to figure out what ride they wanted to do.  Greg  left with a group of about eight GS riders, heading for the dirt trails.  I led a small group that included Steve, Paul and Dave.  We decided to take the Route 22 loop counterclockwise and at Newport headed north up to the lighthouse.

At the end of the Leelanau Peninsula is the lighthouse.  We stopped for a while and took a break from the heat.

Continuing on our loop, we stopped at Frankfort for lunch at a small bakery. Then it was 115 east to 31 east back to camp for the evening.  Being too tired to gear up and find something to eat, some of us ordered pizzas and had them delivered.

Sitting around, we talked about the rides and the impending storm that was headed our way.  Some of the members left Saturday evening to beat the rain.  Myself and most of the others decided to take the chance, radar was looking like the storm wasn't coming through till around 9:00 the next morning.  Most of us would be gone by then.

Sunday morning's weather was overcast and cooler, but you could see the storm clouds heading in.  A lot of us we up early and packed when it finally hit, but some slept in and had to pack up in the rain.  We sat in the covered pavilion for about an hour, Greg showing us all how to sync out Bluetooth headsets with each other.  The rain finally let up some but didn't completely stop.  I left about 8:30 in a light rain and stayed dry for about two hours, then the water started to seep into the folds of my suit.  I stopped a couple of times to wait out the heavier stuff, one time meeting a couple on a Harley trike heading to Indiana, and they were just as wet as I was.  Just south of Mount Pleasant I finally got ahead of the rain and had a chance to dry off.  I got home about 2:30PM, mostly dry.

This was one of the best club events I've been on in my short one year membership, and I'm looking forward to more.  You can see my tracks for the weekend here.  You can see some more member pictures here on the forum.  And if you'd like to submit an article and/or pictures, get a hold of me and we'll get it posted on the site.