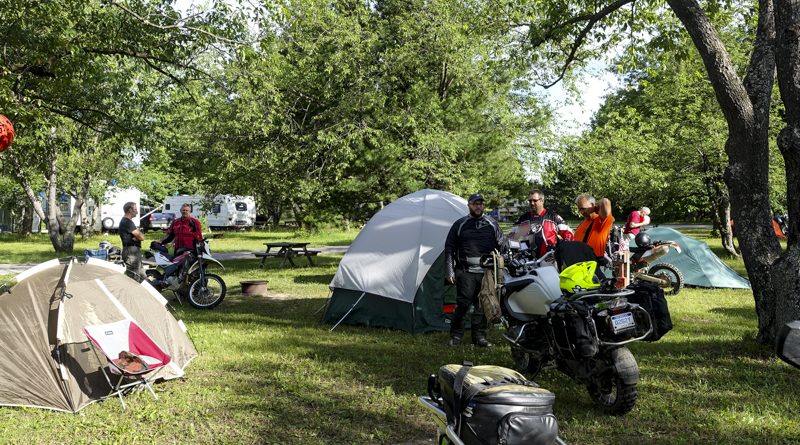 The weather wasn't looking conducive to a weekend camping trip, but a lot of club members went anyways. I woke up to rain on Friday morning, but looking at the weather told me if I waited a bit I could ride around the back side of the advancing front.  I left about 10:00 AM and headed up to Cycle-Moore camp grounds.

At about 12:50 I stopped for gas at Klinkers Corner just outside of Sheridan and this is what it was looking like. 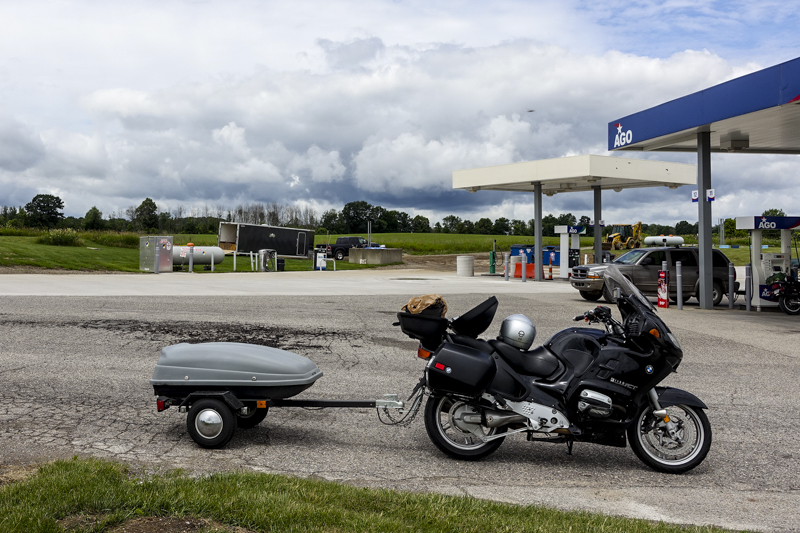 ..and it was pretty much like this the whole way.  I got sprinkled on a couple of times, but nothing serious.  The temp was cool, so it made for some comfortable riding.

I pulled into Cycle-Moore about 4:50 and there was a few members there already.  Talking to the  dirt riders, they got rained on pretty good on the way up. 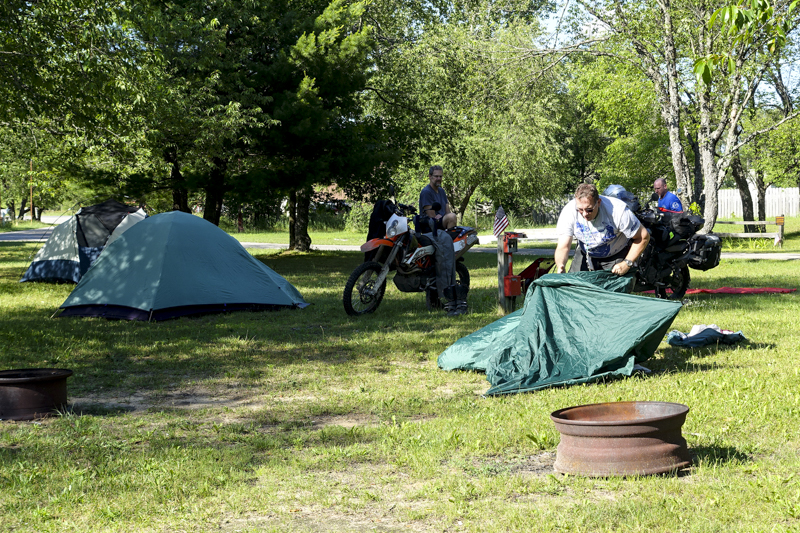 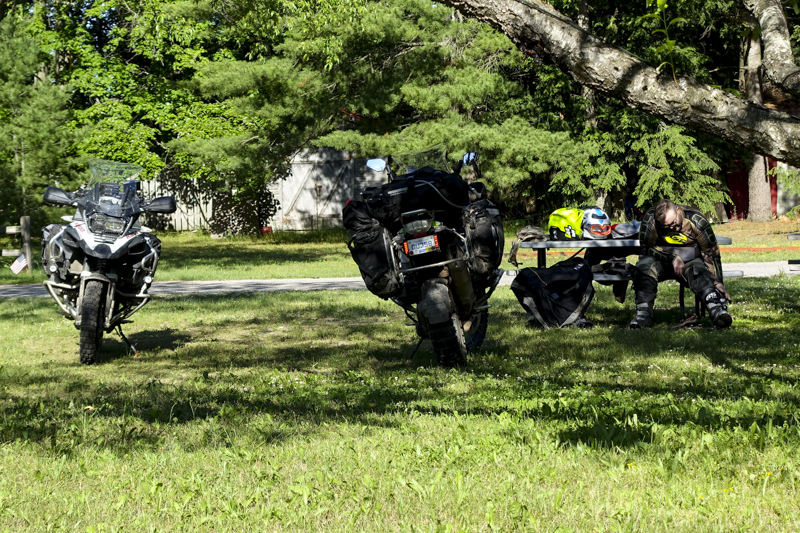 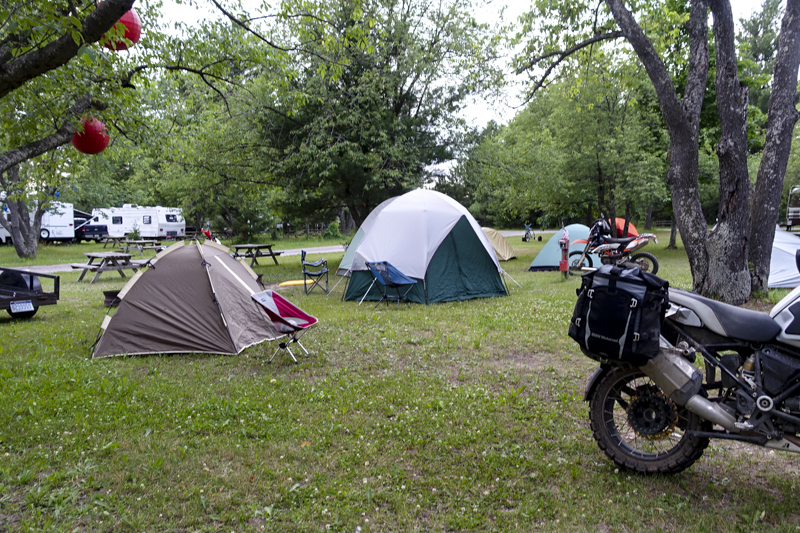 After setting up my tent, Tom Paschka and I, the only two street riders out of what would end up being 17 club members showing up,  went to dinner at Rico's down the street.  Dave McFall, the third street rider, wouldn't show up till Saturday afternoon. 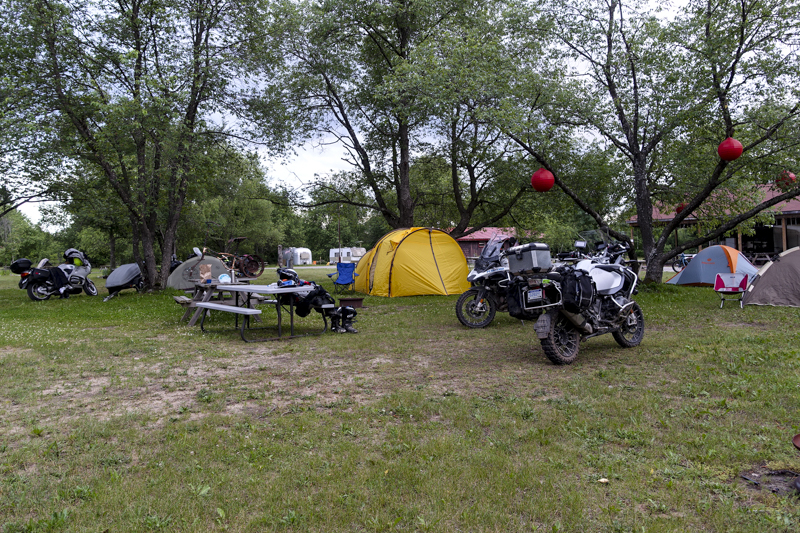 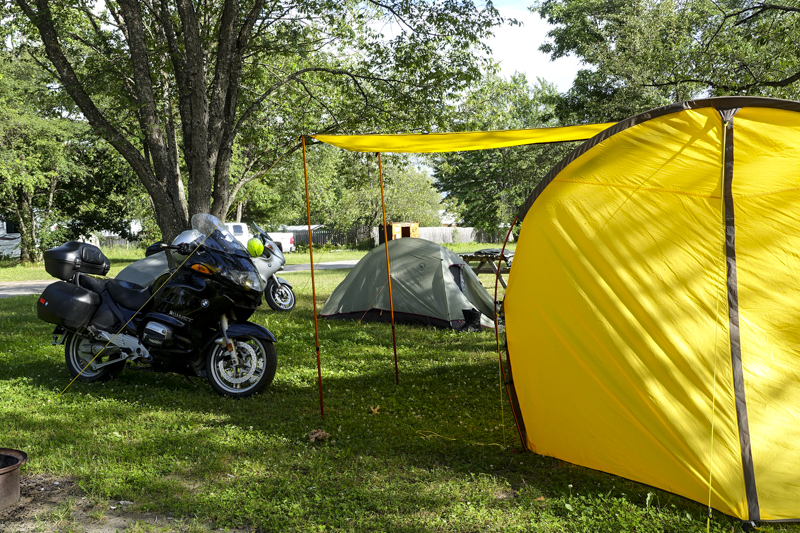 I'd like to thank Shannon Adkins for the tent poles he got tired of carrying around, they work perfect.

Getting back from dinner, more of the dirt guys had arrived and were setting up camp.  After a hanging out a while, I was beat and ready to hit the sack. So with the bike tucked in, I went to bed. 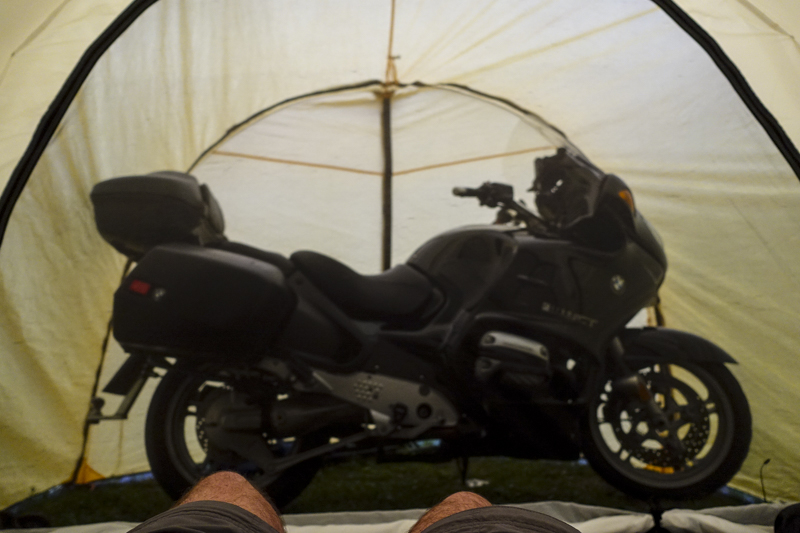 The next day brought some great weather. There was lots of overcast, but you could see blue sly through the gaps every once in a while. I had a planned loop, down 31 to Manistee, and then take 22 up to Northport. Then down around Traverse City, and back to the campgrounds. You can see the route here. Tom P. went along with me, and since he grew up in Manistee, he took me to the Manistee Light House and pier. 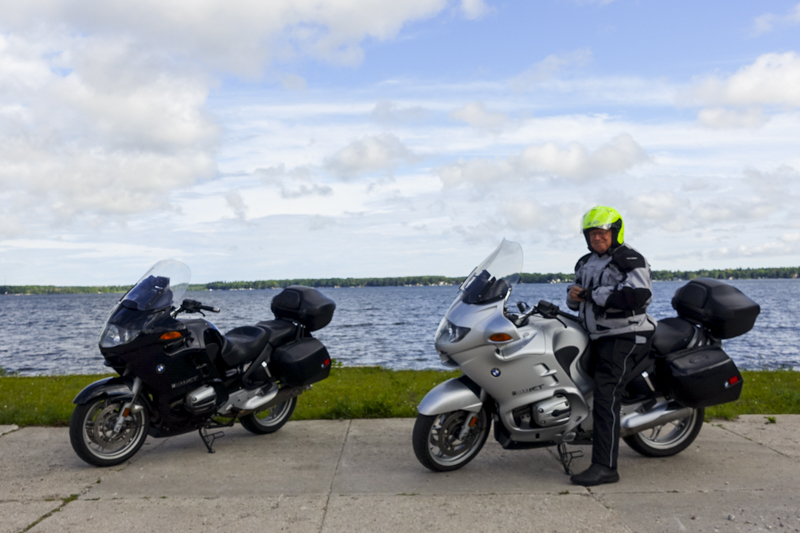 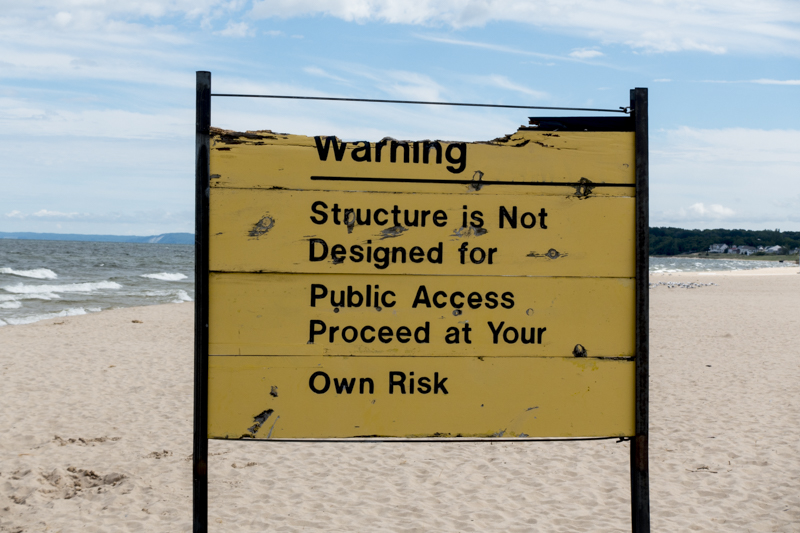 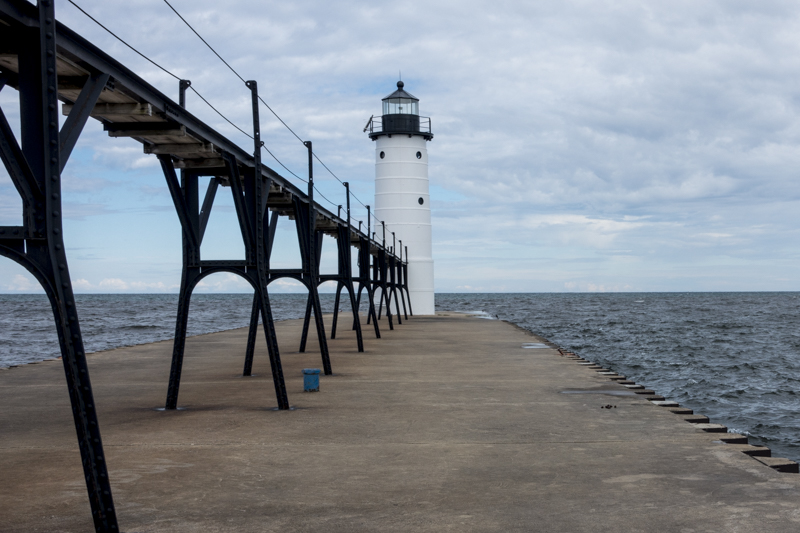 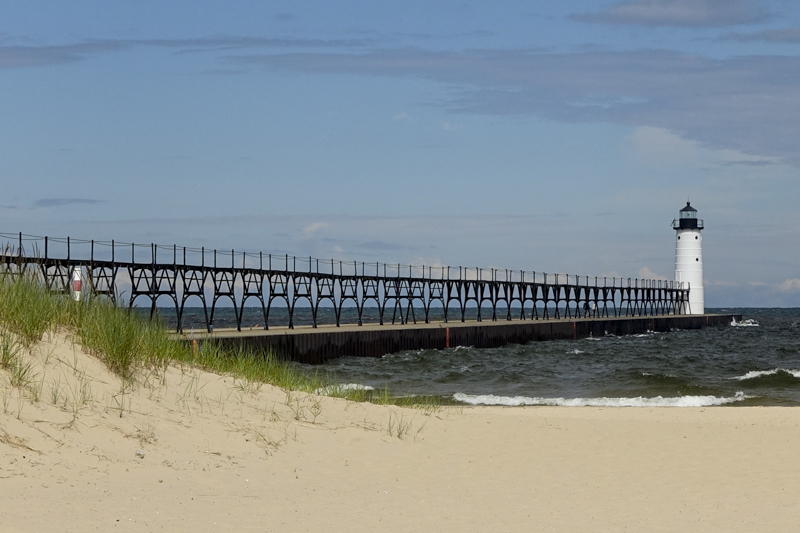 I would have never found this had Tom not been with me, you had to go through this little subdivision of townhouses.  It was cool to see and Tom told me some of the history of Manistee.  My own tour guide.  We stopped in Northport for lunch and then headed back to camp.  We just relaxed  for a while and waited for the GS'ers to get back from their ride. Talking to some of them they had a great ride also. Lots of dirt, mud and sand, and falling down once in a while. 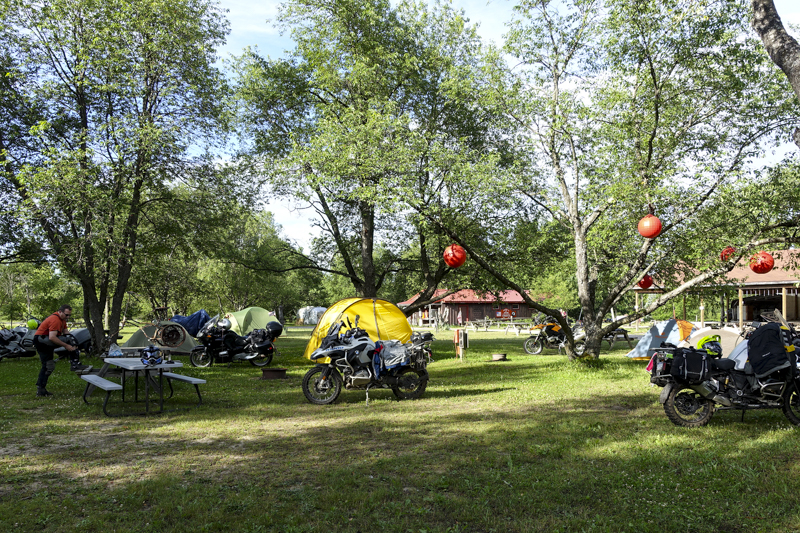 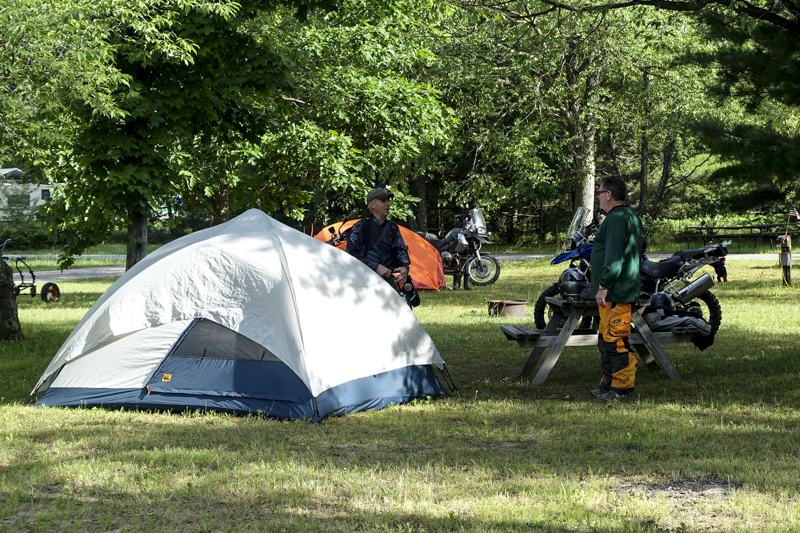 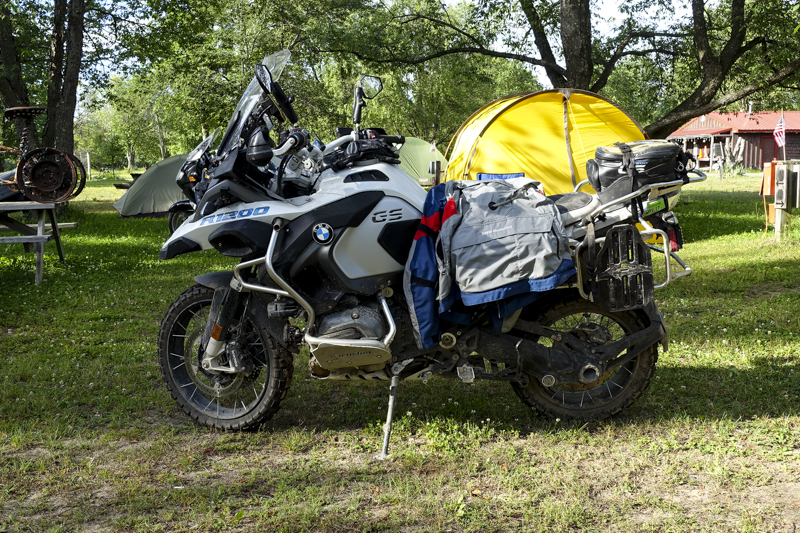 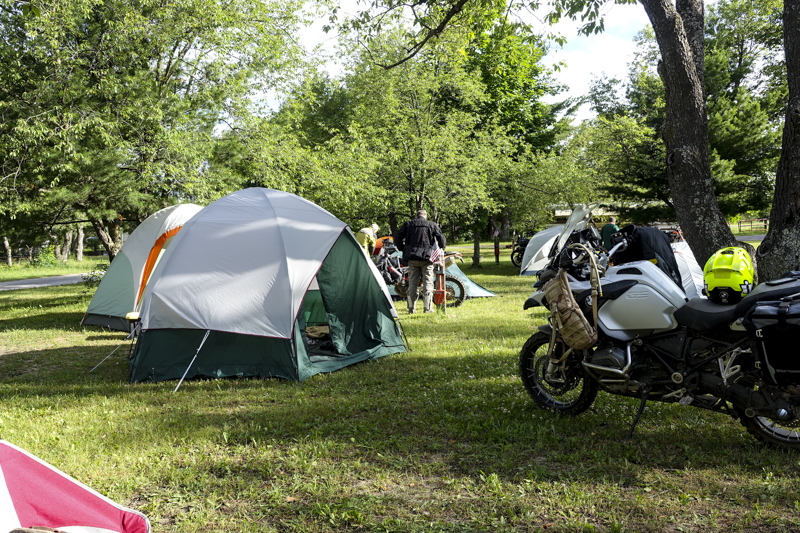 After they got back to camp, a lot of the guys decided to leave Saturday afternoon.  Consulting all the weather apps everyone had, it was looking pretty definite for the rain to hit us sometime that night and into Sunday.  After breaking camp and most of the members leaving, there was only five of us left to brave the coming storm.

As it turned out, there was only some light rain during the late night, leaving everything wet in the morning.  I was up about 6:00 and it had stopped raining by then, so I got up and started to pack everything up while it was stopped. 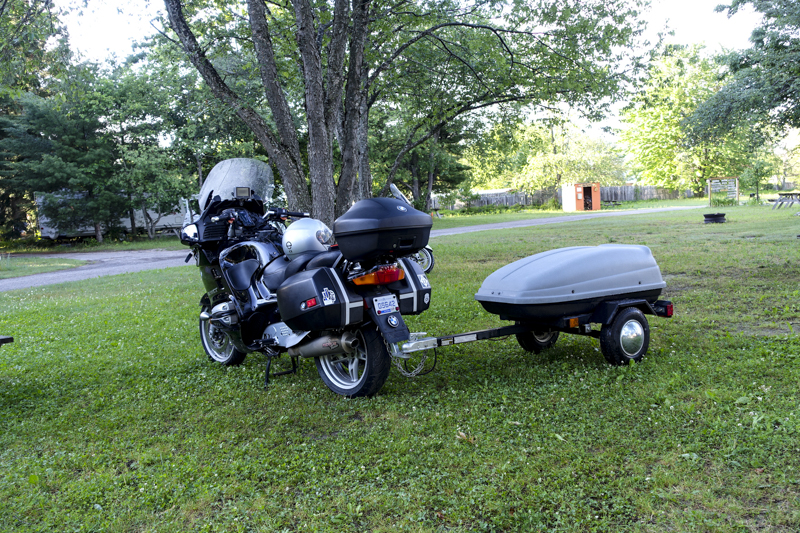 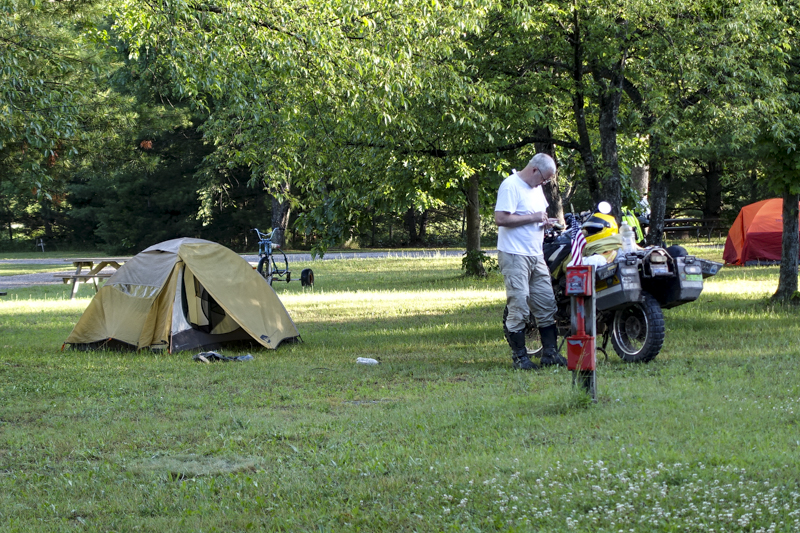 Tom and I left about 7:45 and headed down to Cadillac for breakfast at a place Tom had been to before.  After breakfast we rode south for a while and then split up, Tom wanting to get on the freeway and get home while I took a more circuitous route home.  With the weather looking a lot like it did on the ride up, it was a nice comfortable ride home. 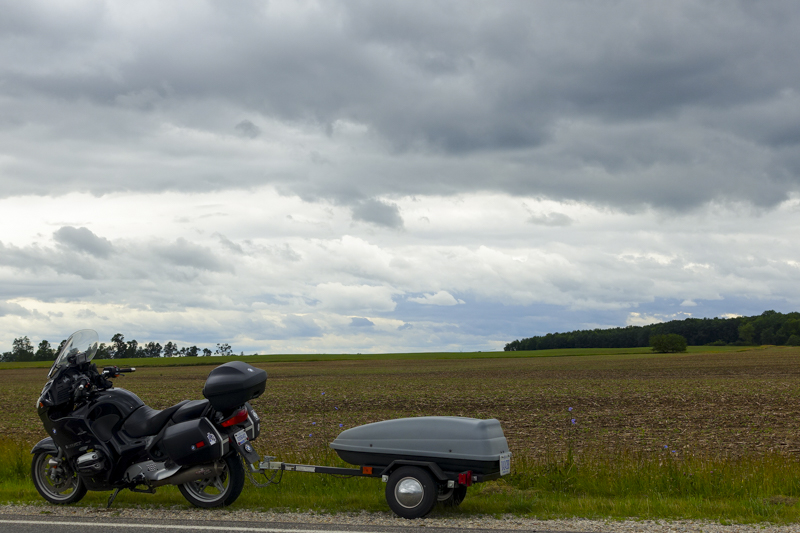 With another fine ride in the logs, I'm looking forward to another with some great people in the club.