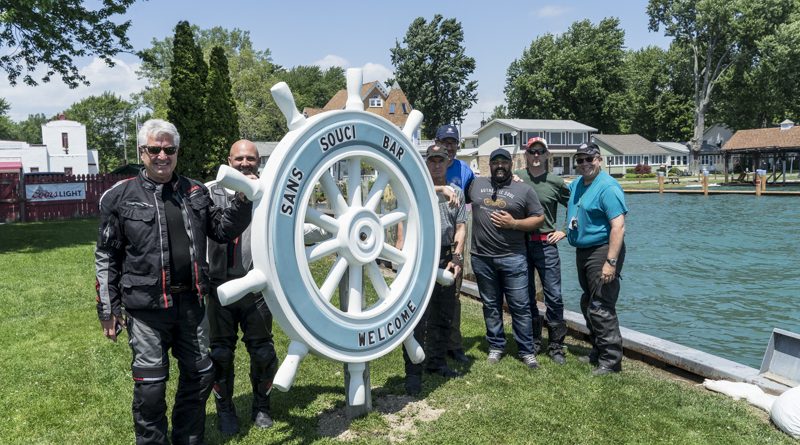 Mike E., our illustrious president, announced on Friday afternoon that he would be riding around Lake St. Clair and the general area Saturday and invited anyone interested to join him. He ended up with nine riders and fantastic weather. We met at Einstein Bagels, located at 16828 Kercheval Ave, Grosse Pointe, and the plan was to leave around 9:30. I was a bit late, as I only saw the post Saturday morning about 7:30 and I was coming from Pinckney, but we managed to leave about 9:45.

We headed south to Jefferson, and a quick fuel stop for some. The rest of us waited in the shade.

Then it was northwards along the coast to Venetian Point. We took a short break to discuss where to go from there, and it was on to Baltimore City Park in Anchor Bay.

By this time it was about 11:00 so the discussion turned to lunch and where to eat. We headed off to Harsens Island and the Sans Souci Bar for lunch on the waterfront. A couple of guys split off at the ferry so we were down to eight. A short ferry ride across the north channel, and we were on the island.

The water level was still pretty high, about two feet higher than normal. Some homes still had sandbags surrounding them. Sans Souci Bar was dry though and we had a great lunch next to the south channel.

We headed back to the ferry about 1:30. After we crossed, two more riders peeled off and we were down to six. We rode north to Marine City and some ice cream.

After a short break and ice cream, we split up and everyone kinda headed their own way. Four of us headed west to 94, jumped on the freeway for a quick ride back. After getting onto 696, at Groesbeck the traffic came to a crawl. The freeway was down to one lane as someone decided to paint new lines that day. We putted along for about a half hour when Mike had had enough and got off. At the next exit I bailed and got off to. I took surface streets over to Woodward and then got back on the 696. Freeway the rest of the way home.

It was a great ride put together by Mike, and we thank him for that. Weather was great, nice and sunny, although it did get fairly warm later in the afternoon. Total ride was about 80 miles, give or take. Here's our track of the ride.

A couple members expressed that the club should put together more rides like this one. I think that anyone that wants to put together a short day ride like this should go ahead and do it. Nothing too complicated or formal, just one or two nearby destinations with a loose route. Post it on the forum with a day or two notice and see who shows up.