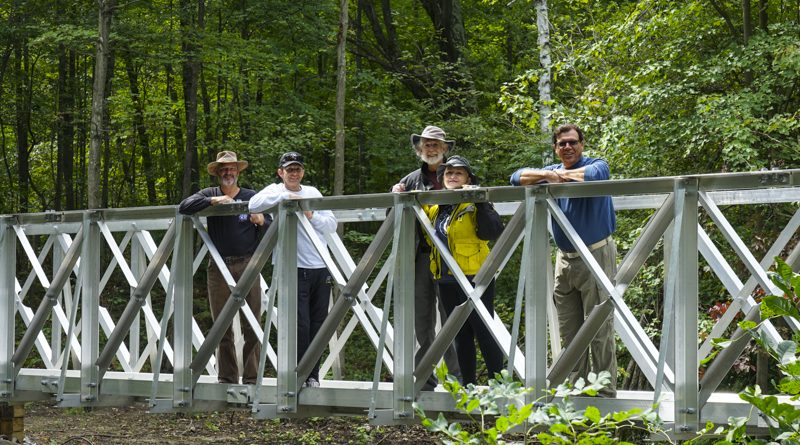 Time again for the clubs annual Thumb Run to Port Austin.  In the past, this was one of the clubs more popular camp outs. This time around we only had 6 members show up. I'm sure this was in part due to the Wailin Wayne ride down in Ohio that a lot of the GS riders went to.  Weather was nice, no rain, thought it did get a bit chilly at night.

Dave McFall and I headed from my house in Pinckney around 10:00 am on Friday morning. The route was to ride over to Port Huron first then ride all the way up the east coast to Port Austin. We go to Port Huron around 1:30pm and stopped for lunch and then again at the Blue Water Bridge. 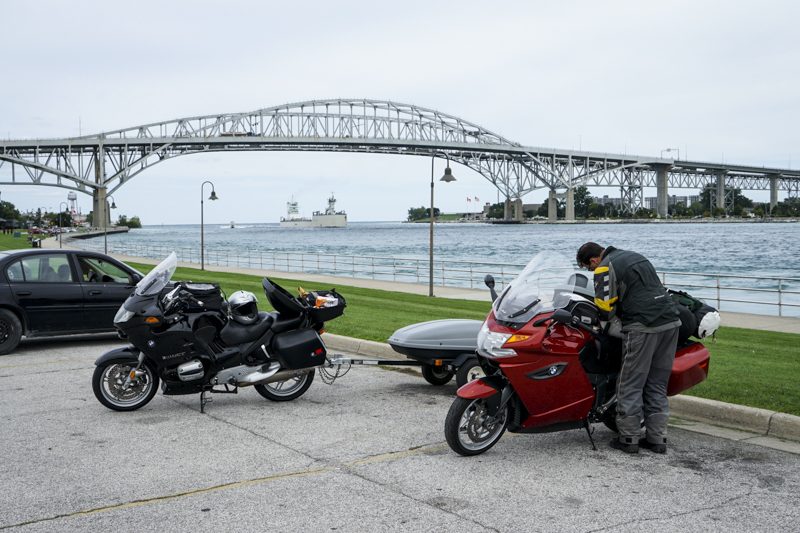 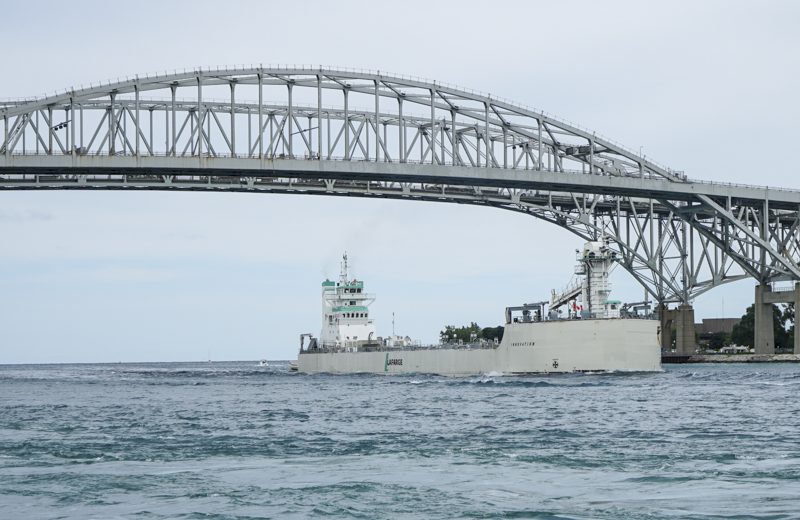 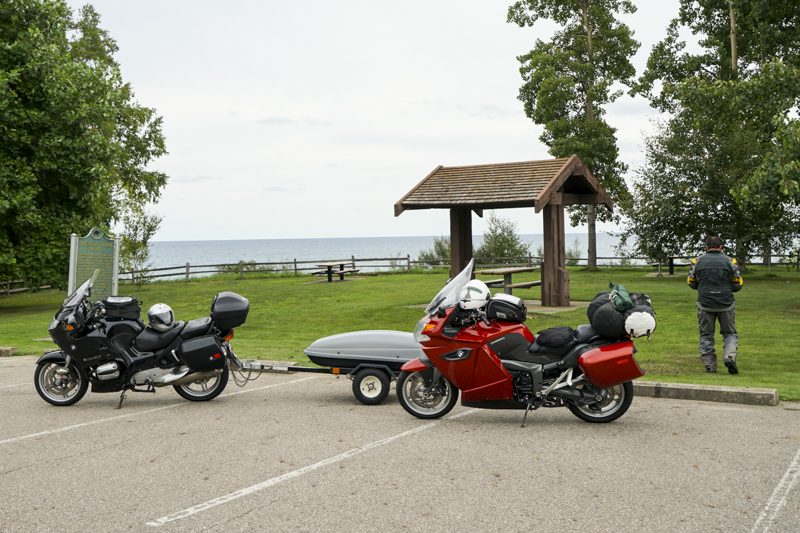 After a short break we're back on the road.  We pulled into camp about 4:00, where Dave DeCook was already set up.  We got lucky as the camp was packed for the weekend.  I don't think it's ever been this full the past times we've been here.  There were only 4 or 5 sites left in the whole park and we got a site that was only a couple of spaces away from Dave Decook and right next to Dave Swan.  Lots of Daves this weekend. 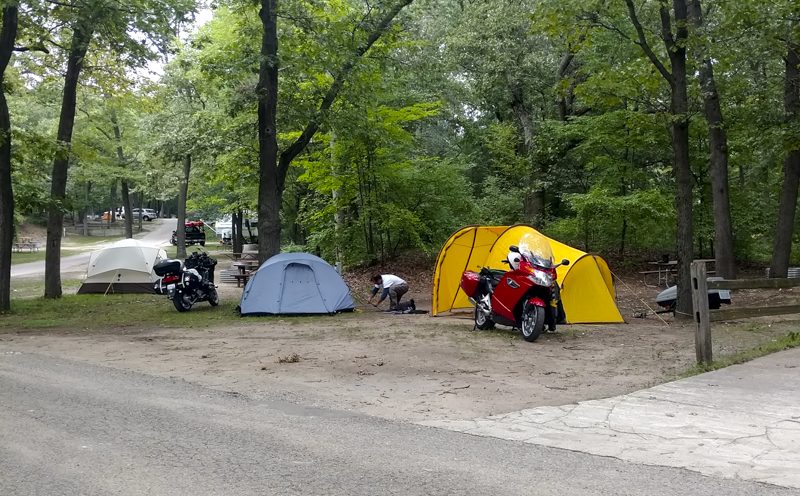 We set up camp and headed out for dinner.  Dave DeCook had packed his own food so he stayed while Dave McFall and I went to the local VFW hall and had all you can eat fish and shrimp.  When we got back, Pat O'Neill had arrived and was setting up his tent.

Saturday morning we went into town to have breakfast, only to find out that our regular place had just recently caught fire, so we ended up next door at the Sportsman Inn. Our original plan for the day was to rent kayaks to paddle out to see Turnip Rock. Since it's surrounded by private property, the only way to see it is by water.  Unfortunately, there was a Coast Guard warning for high winds so that was canceled.  It was still a nice day to ride, so that's what we did. We went down to the Sanilac Petroglyphs Historic State Park to take a look at the stone carvings.  The planets weren't in alignment for this one either, we had missed the time the petroglyphs display was actually open by a week.  They closed up on Labor Day.  You could kind of see some of them through the fence if you looked hard enough.  There was a two mile hiking trail that's open all year long, so we went for a nice hike. 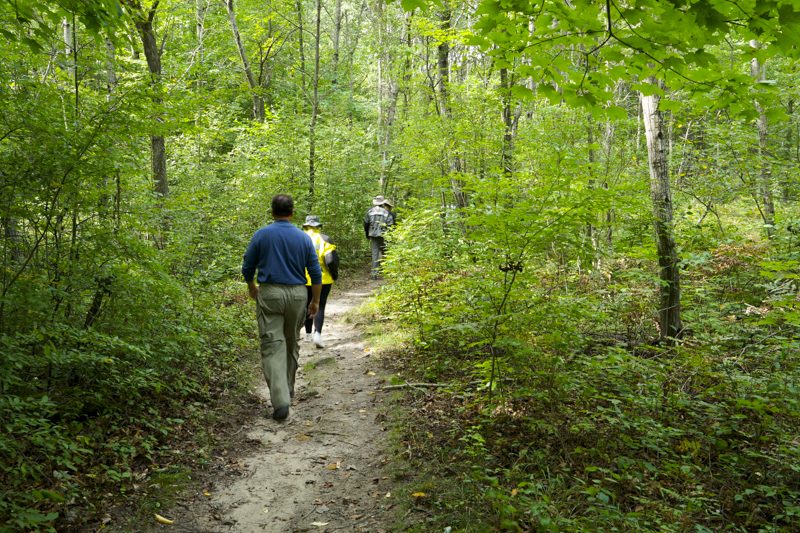 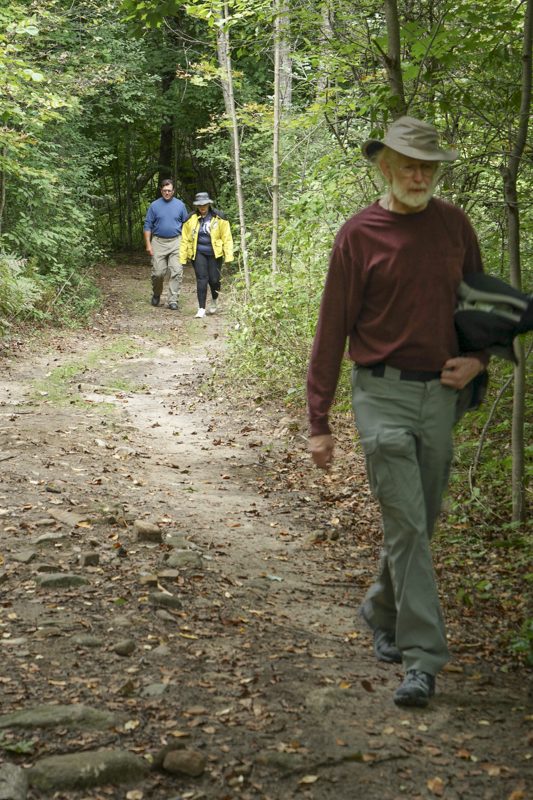 Back to the bikes, and it was off to the home of the GIANT ice cream cone at Grindstone General Store, where a baby size cone is 14oz.  I think I ate about half of mine before I couldn't eat anymore. 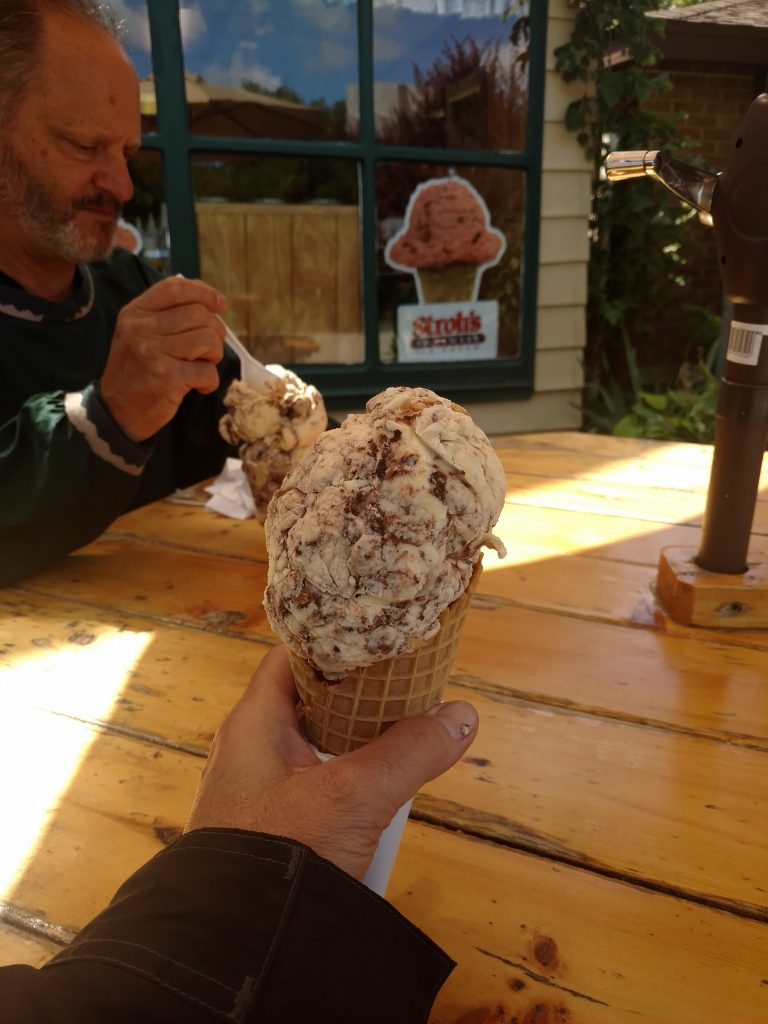 Dinner was at Pak's Backyard Cafe. They do this thing where a different chef takes over the kitchen for the weekend, and this weekend it was Captain John's Smokehouse. Smoked brisket, salmon and chicken was on the menu, and man was it delicious.  I had the pulled chicken nachos and McFall had the smoked salmon. It was outdoor seating and the weather was beautiful. 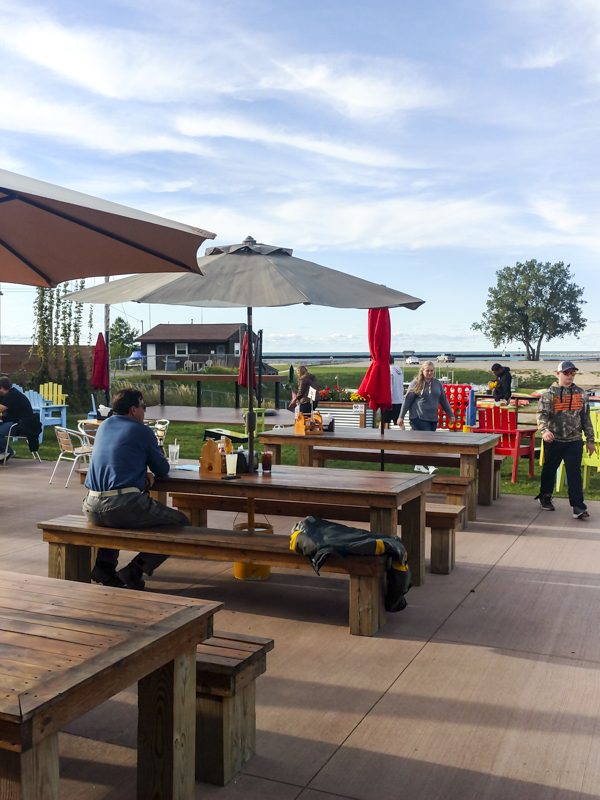 With our bellies full, we headed on back to camp where we lit a fire and sat around digesting our dinner.  There was an amazing sunset that night.

Sunday morning, it was the break camp dance but we weren't in a hurry so we took our time. 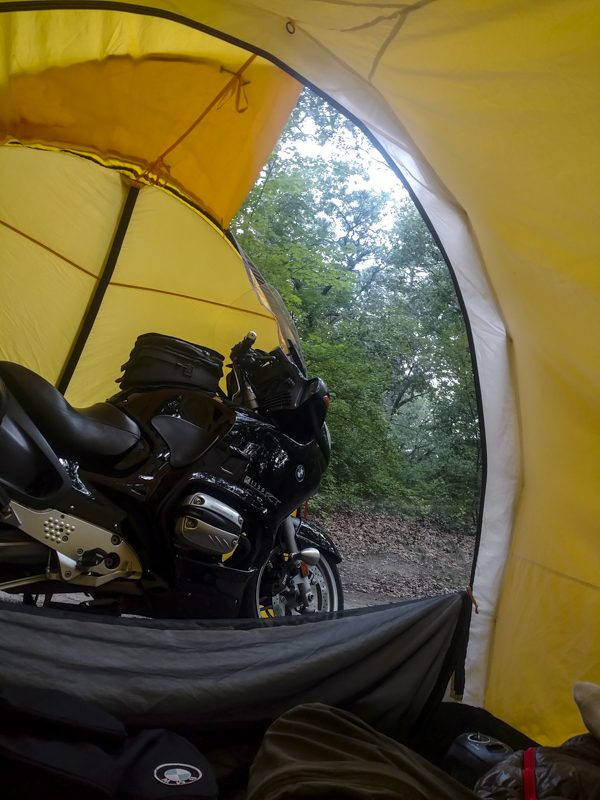 Breakfast was at Walt's of course, but no cinnamon buns this time around.  The place was packed so we shared a table with the local funeral director and wife and another couple who was kind enough to make room for us.  Not only that, but he took care of our breakfast bill for us.

On the way home, after Pat had peeled off to head to his place , McFall and I stopped at the GM proving grounds to suit up in rain gear as it had started to sprinkle a bit, and it looked like it was going to get worse.  Of course, as it always happens, five minutes after getting back on the road the rain let up and stopped altogether just after that.  At this point, neither of us had far to go so we just left the rain gear on.  Another great ride in the books. Here's our tracks for the weekend, 469 miles. 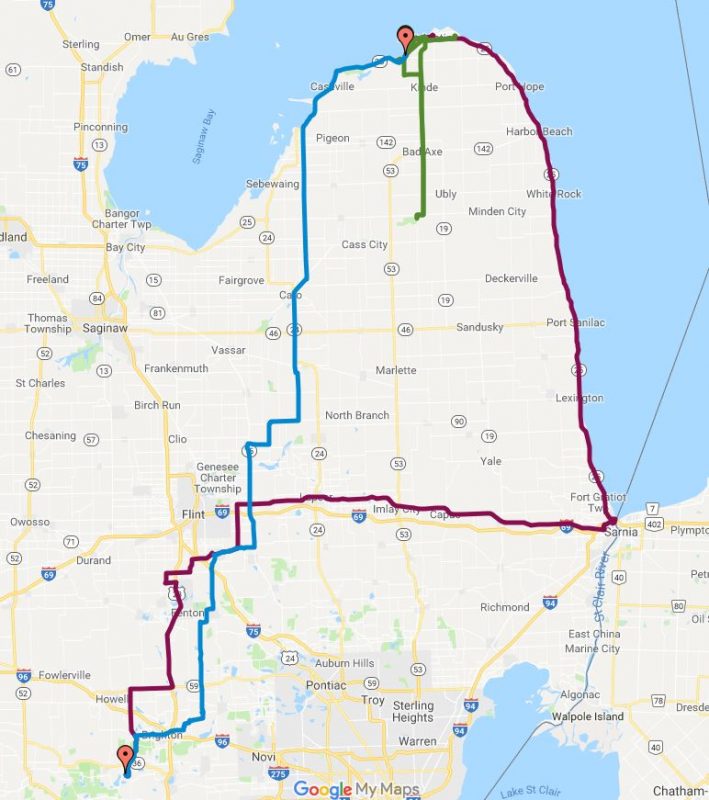